When you think back at bakery items that you can see shining threw the case back at you while your trying to decide which yummy confection to choose, you will usually picture Eclairs along with the other goodies. Eclairs are a very decadent and indulgent treat, topped with chocolate ganache and filled with pastry cream atop a airy shell. This recipe gives you the same great look and taste of an eclair without the milk or egg ingredients of its counter-part. With a luscious vegan pastry cream, ganache, and shells it will be a labor of love, but the end results are sinfully delish. Serve chilled out of the fridge with vegan milk or coffee and you have a decadent vegan dessert to savor. Enjoy!

In a medium saucepan, heat the pastry cream ingredients to a boil over medium heat. Once boiling and mixed with no lumps and completely dissolved.

Add the cornstarch mixture and whisk vigorously until no lumps remain. Once the mixture has thickened and gotten to this point you can add your vegan butter.

Mix the vegan butter into the mixture and then once done pour the mixture through a strainer back into bowl of large measuring cup to cool. Cover with plastic wrap, lightly pressing the plastic against the surface to prevent a skin from forming. Chill at least 2 hours or until ready to serve. The custard can be made up to 24 hours in advance. Refrigerate until 1 hour before using. When you go to fill the eclairs, restrain the pastry cream to ensure and even, lump free filling.

Heat the oven to 425 Degrees

In a large saucepan, bring the water, vegan butter, salt and sugar to a rolling boil over medium-high heat.

When it boils, immediately take the pan off the heat. Stirring with a wooden spoon, add all the flour at once and stir hard until all the flour is incorporated, about a minute.

Scrape the mixture into a mixer fitted with a paddle attachment (or use a hand mixer). Mix at medium speed for a couple minutes until dough cools slightly.

With the mixer running, add The Vegg, a little at a time. Stop mixing after each addition to scrape down the sides of the bowl.

Using a pastry bag fitted with a large plain tip, pipe fat lengths of dough (about the size and shape of a jumbo hot dog) onto the baking sheet, leaving 2 to 3 inches of space between them. You should have 8 to 12, you can choice size and shape you want. (Adjust cooking time accordingly)


Egg Wash
Brush the surface of each eclair with the The Vegg. Use your fingers to smooth out any bumps of points of dough that remain on the surface. Bake 15 minutes at 425, then reduce the heat to 375 degrees and bake until puffed up and light golden brown, about 25 minutes more. Try not to open the oven door too often during the baking. Let cool on the baking sheet. Using a pastry bag fitted with a medium-size plain tip or with a spoon, gently pipe the vegan pastry cream into the eclairs, using only just enough to fill the inside (don't stuff them too full).

Ganache
In a small saucepan, heat the all the ganache ingredients over medium heat just until it boils. Immediately turn off the heat once melted. Whisk until melted and smooth. Set aside and keep warm. The glaze can be made up to 48 hours in advance. Cover and refrigerate until ready to use, and rewarm in a microwave or over hot water when ready to use.
Dip the tops of the eclairs in the warm chocolate glaze and set on a sheet pan. Chill, uncovered in the refrigerator, at least a couple hours to set the glaze. Serve the vegan eclairs chilled. 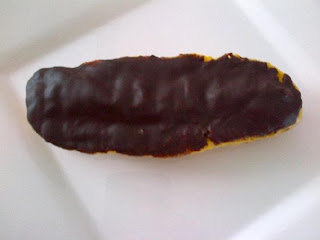 -Amy
Posted by The Comforting Vegan at 10:19 AM