Some food means more then others. If you're curious what I mean, sometimes food evokes emotion when we eat it. It takes us back to a special time in our lives, whether that's a memory of a loved one that used to make it for us, one that has passed away. It's something that will last forever in our memory. Those foods to me are the best and why I cook comfort foods, people seem to emotional connect to those more and I love when that memory pops up when they're eating what you make. This cake evokes a very special memory for me and my husband. We had banana cake at our wedding, for my husbands grooms cake. I surprised him with it when we went to cut our cake, they rolled it out and it was a big batman logo (because he's a giant batman fanatic). He was so excited and I think ate his weight in banana cake for a week. Which I think is adorable because my twins are now in love with this cake as well, just like their dad.

This recipe shows you how to make in my opinion, the BEST banana cake ever. Now that's a mighty big statement to make but I think it will hold up to its name. With its moist spongy cake, perfectly sweetened interior, paired with the luscious frosting...you can't go wrong! Enjoy this cake for any occasion, but perfect for birthdays. I know my kids love it and give it a thumbs up for approval. Pairs great by itself or along side a tall glass of vegan milk or better yet, vegan ice cream of your choosing...may I suggest, chocolate or peanut butter. You'll thank me later, Enjoy!


Additional Info
(Links provided below for Different Frosting Recipe, they may have to be reduced by half to accommodate this recipe or if you like frosting in mass quantities, go crazy!)

This recipe is great with a variety of different frostings, you can do a traditional Vegan White Frosting. Go more decadent with a luscious Peanut Butter Frosting OR go crazy delicious with Vegan Chocolate Frosting

Start by smashing your bananas. In the bowl of an electric mixer fitted with a whisk attachment, place the bananas in and turn the mixer on medium-high to mash the bananas. This is a very simply way to mash the bananas without making another bowl dirty and no effort on your part...best part!
Next, add in 1 tablespoon lemon juice, set aside as well.

Place 1 1/2 tablespoons lemon juice in a measuring cup. Top to 1 1/2 cups with vegan milk and set aside for when you need it later. This will look curdled, that's what you want.

Beat together the softened vegan butter, brown and white sugar until combined. Add in vegan egg substitute and vanilla next. Mix on high until light and fluffy (almost the texture of frosting, this is called creaming)

Once the mixture is creamed together, add in your bananas and mix to combine.

In a separate medium bowl combine the flour, baking soda and salt.


You'll start combining everything now. Alternate adding the flour mixture and the vegan milk to creamed mixture stirring just until combined. (Do not overmix).

Put into the oven and Bake 60 to 70 minutes or until toothpick inserted in center comes out clean. If it's still soft in the middle, give the cake another 5 mins and check, recheck until done. (do not over bake). When the cake it done, remove it from the oven and allow it to cool completely before frosting. 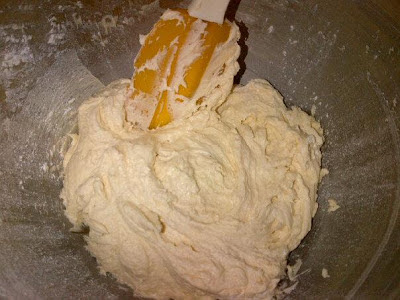 When the cake is complete, keep its on your counter or better yet in your fridge, I love the texture it gets in the fridge when it solidifies a bit. Pair it with vegan milk or even better, vegan ice cream. Enjoy!

-Amy
Posted by The comforting vegan at 10:02 AM