What do we think when someone says...Chocolate, Fudgey, Decadent, and Yummy? I don't know about anyone else but my mind goes straight to brownies. Brownies are definitely one of the most decadent desserts out there and it always curbs any craving for chocolate. This recipe shows you how to make not only a brownie but a perfectly chocolaty, moist, and for a choco-holic, perfect brownie. Oh and did I mention they are gluten-free and vegan...yeah, I know impossible right? Not even close, this is a fool proof easy recipe that you will want to make again and again. These brownies are completely craveable, cut into 9 bars or smaller bite size pieces for on the go nibbles. Serve them with a big glass of vegan milk and watch your chocolate craving disappear. Enjoy!

Brownies
Combine all your brownie ingredients (except the flour) in a food processor or blender and blend until smooth. Pour in flour and on a low or dough speed until combined together. The mixture will be thick and very fudgey.

Once the mixture is combined, fold in vegan chocolate chips.

Once you have the brownie batter, pour into 8×8 baking pan that has been greased well and dusted with the gluten-free flour and cook for 25 to 30 minutes. The brownie will be firm, smell chocolaty (not burnt), and bounce back when pressed.

Once the brownies are done, let them cool in pan until ready to handle.

When the brownies are ready to handle, frost the top of the brownie with the homemade vegan chocolate frosting (or store bought). Let the brownies rest until the frosting has hardened slightly before cutting.

When they are ready to cut, cut into 9 brownie bars or smaller brownie squares. Store them in an airtight container or place in the fridge. Serve with milk and enjoy! 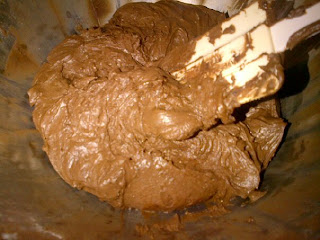 
With the mixer on low, gradually add the vegan milk and vanilla. Beat on low until incorporated, then beat on medium high until the frosting is airy and thoroughly mixed, about 1 minute, stopping to scrape down the sides of the bowl. Once mixed, use in recipe. You can be stored in the fridge until ready to use. To make is spreadable again after sitting in the fridge, place in mixer with whisk attachment and add 1 to 2 Tbsp vegan milk to loosen and use.

-Amy
Posted by The Comforting Vegan at 10:33 AM