The inspiration for this comfort dish comes out of necessity the mother of invention...or I didn't want to go to the store, BUT none the less it turned out to be a very delicious dish! With the heartiness of the vegan chicken and peppers, the comfort of the pasta, and a slight kick & zip from the red pepper flakes and capers. Last minute dinners never looked and tasted so good! Enjoy!

In large pot, make your pasta. (as stated in brands directions).

In a large frying pan heat 1 Tbsp olive oil over medium heat. When the oil is hot, cook the chicken until browned on both sides. Remove from the pan and set aside.

After the peppers are cooked return the vegan chicken cutlets into the pan and bring the mixture to a boil and covered until the ingredients are cooked together and coated, 10 minutes. When done, reserve 1 cup of sauce and peppers. Remove chicken and set aside to be placed on top for serving. Toss your cooked pasta in the remaining sauce and your vegan cheese, tossing until cheese melts and blends. Serve on platter with the vegan chicken placed on top. Pour the 1 cup of reserved sauce on top of the pasta and chicken, sprinkle with a touch more parsley, your favorite vegan Parmesan and serve. Enjoy!

-When I run out of wine or don't want to run to the store, I find that if I substitute a tablespoon to this dish will give you some of the wine taste even without the wine. Grey Poupon was white wine in it and it works well in this dish as well as others when you want to sub it.

-This dish could also be served with white or brown rice, instead of the pasta. 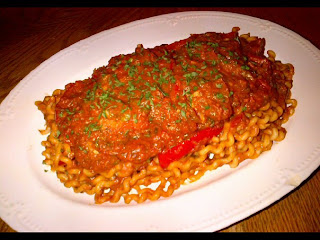 Posted by The Comforting Vegan at 9:33 AM